Hire a Limo for Other Small Chicago Airports

In this post we will describe about the smaller airport in Chicago and Best Limo service you can hire to or from these airports. If you are looking to get somewhere quickly you can book your reservation on Limos Inn.

The Chicago Executive Airport is one of the oldest airports founding in 1925. It is (PWK) (formerly Palwaukee Municipal Airport) little public airport located in Wheeling, Illinois — about 18 miles northwest of the city. Chicago Executive Airport has experienced rapid growth. The airport logs over 77,000 takeoffs and landings every year, and is categorized as the fourth largest airport in Illinois. It is usually managing executive jets, boasting around 20 seats. It is also used for military transport aircraft. Today, it is one of the nation’s busiest reliever airports with over 325 aircraft, including 57 corporate jet aircraft.

The Chicago Rockford International Airport (RFD) is a bit larger and ranks as the third busiest airport in Northern Illinois. It is further from Chicago – roughly 85 miles northwest of the city in Winnebago County. The airport features low-cost flights to not-so-regional, popular vacation destinations like Florida, Las Vegas, Phoenix, Jamaica, Punta Cana and Cancún. RFD covers over 2900 acres and is equipped with two runways offering around 40,000 aircraft operations per year.

Gary/Chicago International Airport (GYY) is located in Lake County, Indiana, but is only 25 miles southeast of the Chicago Loop. It bills itself as Chicago’s “third airport,” but Rockford has earned that distinction in numbers. Although it is a joint civil-military public airport, there are currently no commercial airlines servicing GYY. Still, Chicago-based Boeing has chosen to permanently base its Midwest corporate jet fleet at GYY and it is a popular hub for business travel. Most notably, airplanes seen in the Chicago Air & Water Show depart from Gary. 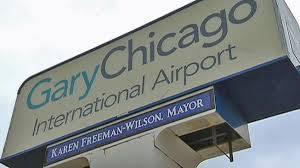 If you are in the search for Luxury Limo service for these airport transportation than make a call to Limos Inn. You can Book a limo to these Airport for your vacation or business conference. We at Limos Inn can ensure you for proper drop off and pick up times for your trip. Our airport limo services meet your requirements and preferences.

We use cookies to ensure that we give you the best experience on our website. If you continue to use this site we will assume that you are happy with it.Ok